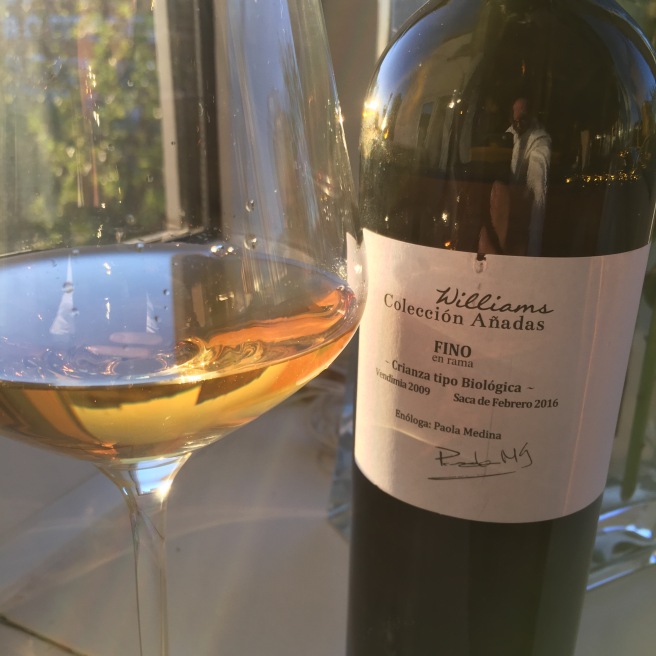 These Williams Colección Añadas are really fascinating. These are “vintage” sherries that have been statically aged – the year’s mostos put in botas and left to get on with it rather than forming part of a solera. As a result there is a bigger scope for variation in the resulting wine due to the different characteristics of the fruit and mosto used and the formation and development of the flor in the botas, meaning a bigger variation in what comes out of the barrel compared to the solera wines. This is a case in point: it is so utterly different to the 2006 Vintage Fino and the Pando it is remarkable.

This one is from palomino from old vines (between 60 and 20 years of age) in albariza vineyards in Añina and Carrascal (Jerez) and has been statically ageing for seven years in botas of american oak of 500 and 600L before the saca in february of this year, classification as a fino and en rama bottling.

The first time I had this I didn’t really have the time to study it in detail but I am quite pleased with the tasting note I came up with. The colour is indeed evolved, it has a fruitful, sweet and oxidized or “sherryfied” nose. On the palate it is rich and full bodied – a sensation of glycerin- and a resulting impression of fruity sweetness. It is as if the flor hasn’t really got to work on this. Having said that you can still taste the minerals in the background – a sensation almost like a mineral red. Finally there is also a touch of age in the finish – as if it was already heading down the woody path.

(Due to agenda issues I am still working on the horizontal/vertical/diagonal of the full set that I picked up weeks ago from Coalla Gourmet – in the meantime I have picked up a few bottles from  Reserva y Cata in Madrid so at least have some bottles to keep me going. Kudos to both for stocking these fascinating wines.)