They have a quite amazing list of wines at Taberna Palo Cortado with more than 300 references, many of them new to me even after nearly three years of hunting out obscure sherries.

This is just such a one, and a great example of the “new old”. I gather these guys have a five hundred year old bodega – at least the physical premises are said to be that old – but as far as I know they didn’t start selling their own wine until recently. They have been involved in the wine business though providing bottling and other services for other bodegas. Now the time has apparently come for them to sell their own family soleras and this is the fino.

It is definitely what you would call an “artisan” product. Has a deep old yellow-green color and is sweet on the nose, with hints of fennel leaf, and not a great deal of biological influence. Then it is broad and heavy on the palate, saline without being zingy, seems like a fair whack of glycerine and again a lot of that liquorice root. Blind I would probably guessed it was one of the ecological pedro ximenez en rama finos (but since I didn’t taste it blind I am going to say a mosto from somewhere inland like Trebujena).

Not really my kind of thing – but it is certainly full of character.

Glory be to Angelita Madrid. Yet another absolutely cracking lunch yesterday with some top wines by the glass and a really special one to finish. A rare old wine and a privilege to taste it – there can’t be many of these bottles still in circulation (there were only 2,600 seven years ago). But how had it stood up to the seven years in the bottle?

I had high hopes given the provenance (originally Perez Barquero) and the quality of the 2013 release, but by comparison to that wine this seemed to have faded. The acetaldehide hay bales had gone and bitter, bottle age notes seemed to have taken over the nose, and while still zingy and potent on the palate it seemed much less interesting in shape – the bitter almond finish taking over all too soon.

So, a privilege for which I am very grateful but this one is more evidence for the case against excessive bottle ageing. I still have a bottle of the 45 and will get drinking it based on this.

A sweet wine from palomino fino (listán Sanluqueño) that I was first told had been aged in Sanlucar in old oloroso barrels but I have since been corrected – inox all the way.

I have only ever had a couple of sweet palomino wines and haven’t really warmed to them. (In fact to be honest I am not the biggest fan of sweet wines in general.)

This has a nose of sweet tomatoes and a nice mineral, sweet herb sweetness on the palate. It has a nice texture and isn’t over the top in sugar or alcohol, but for me lacks a bit of acidity up-front and has a slightly sticky bitterness – like biting tomato seeds – on the finish. Comes across as a bit heavy and a bit two ended – no real shape to it.

File this one under interesting. 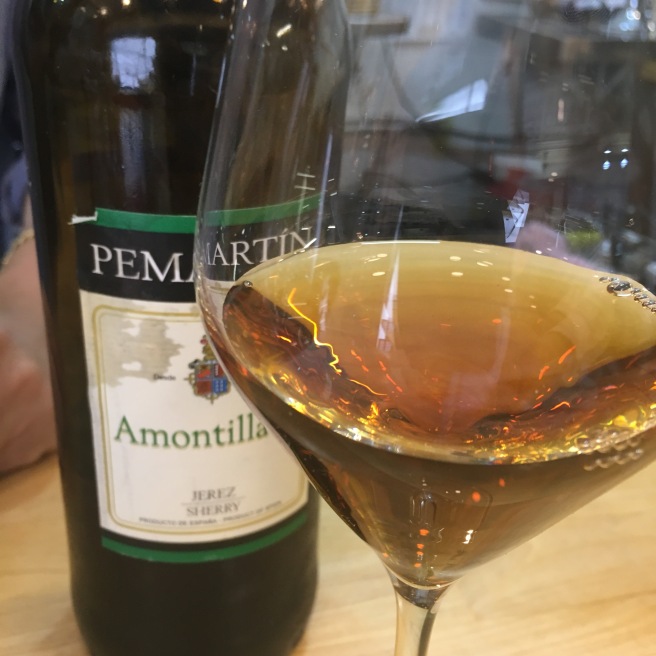 After years of drinking sherry and enjoying it, and a couple of years of even writing a blog about it, I might have been expected to have come across most of the available sherries. But I have not. For a start, seems like every month there are new labels (not necessarily new wines, but more about that on another occasion) but it would be pretty good going even to get to know all of the 100+ generosos by the glass that are on offer in Territorio Era. I reckon I visit the establishment as often as anybody and nevertheless your man David can still surprise me with bottles of which I have never heard. And here is one.

It is called Pemartin, it is owned by Diez Merito, and it is a pretty decent amontillado. You would say it is at the youngish end of the scale both biologically and traditionally: not a lot of biological impact on the nose or profile or massive flavours on the palate, but a perfectly pleasant wine with a nice buzzy start, caramel middle and fresh finish. Just right for accompanying a quick mollete de oreja, which is just as well …

One of the classics, and here in a classic form, a bottle that must be ten years or so old, with the famous name of Domecq across the top. I tried this one at the bar of Territorio Era (a top spot if you want to try bottle aged and other rare sherries).

As you can see, the colour has certainly evolved in that time. It is beautifully clear but has taken on a hue halfway between yellow and orange amber.  On the nose it is nutty and baked applet but just a little bit flat – not a big aromatic profile. Then on the palate it is dry and saline and, again, almond and baked apple flavours, with a bitter finish. 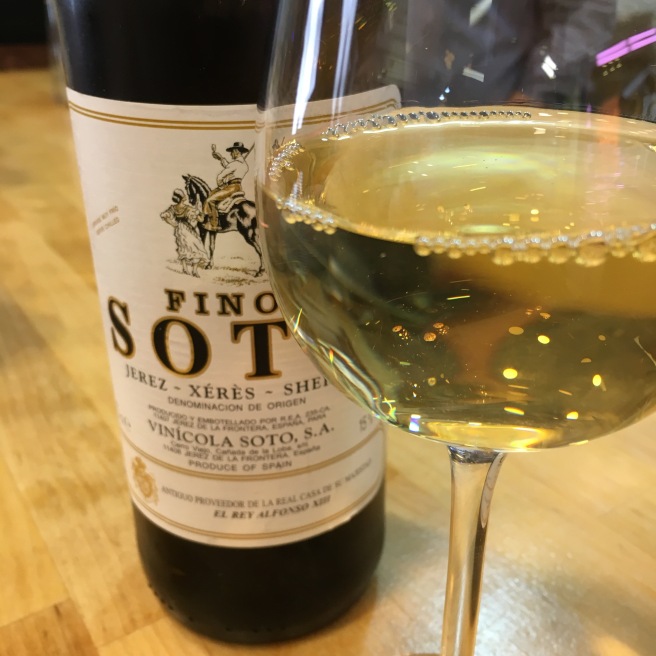 This has been a fair time in the bottle and it shows, at least at the beginning, with a pretty flat nose and a lot of liquorice on the palate. Improves after a little air and loses those more jarring notes on the nose. Had a serious palate with good salinity – even heat – but still a little too liquorice heavy for my tastes.

Not really my bag but worth tasting – the bodega has quite a history or so I am told. One of the 105 (!!!!) generosos now available by the glass at Territorio Era. 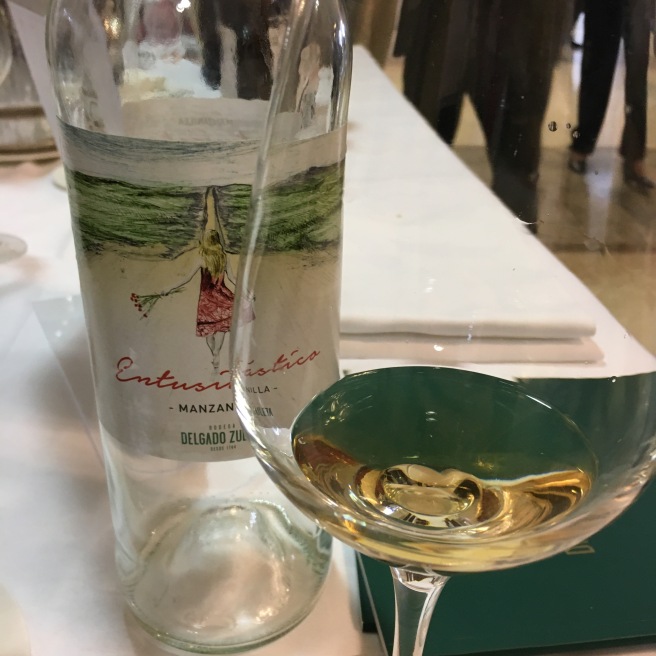 One of the more interesting projects around is the Entusiastico manzanilla by Delgado Zuleta – which aside from being “bio” and all the rest is one of the only examples I can think of of a brand new solera. You have to say that the label has improved out of sight.

My impression was that the second saca seems to hold together a touch better than the first while maintaining a little bit of that softer-than-apple fruit on nose and palate. On the other hand, still a bit short of zing and real profile.

After a frankly demoralizing salad at my desk I have escaped my bonds for a quick refreshment in my local hostelry of choice and in the form of this sharp, racy version of a palo cortado by Faustino Gonzalez.

These guys label everything as en rama – which strikes me as odd for these older wines – but for whatever reason it does come across as a smidgen dull and cloudy to begin with. It is defined on the nose alright. Has a piercing, sawdust and tomatoey vinegar nose – really sharp. Then sharp again to start with on the palate, followed by dry, woody caramel flavours (notes of amontillado, as the back label says) and a bitter, zingy, mouthwatering finish.

Sizzling, acidic stuff but maybe lacks the depth of flavour to balance that sharpness.

One of the standards on offer at the bar of Territorio Era and an old school fino. As you can see it has the typical rich straw colour with a slight green tinge. On the nose it has a touch of green apple and then nutty and bakery aromas. On the tongue it is big in volume and again has a flash of green apple and then bitter, almost burnt almond yeastiness. A good no-nonsense refresher though.

A good friend of mine recently gave me a chunk of liquorice root – known here as “palulu” – because he maintained that it was important to my wine tasting education to understand this substance. We duly chopped the thing into kindling (using ever larger and sharper knives in defiance of all health and safety regulations and indeed common sense) and gave the splinters a good old suck and chew. The flavour was fascinating – a bitter, sappy aniseed – not to mention the sensation of chewing wood.

He was dead right about its importance in wine tasting terms. It is one of those flavours that you find deep in a lot of the wines from down South, and in particular, I find, in some of these pedro ximenez finos from Montilla Moriles.

This fino by Lagar Blanco – with which we kicked off an excellent lunch at La Malaje yesterday – is one that I have wanted to write about before. It is a seven year old fino that has developed nutty aromas and flavours but underneath there is just a hint of palulu bitterness, which I must admit I had found a little disconcerting in the past (before I embraced the chewing of the root itself). Punchy nose and a gentle, seawater salinity to it – not as sharp or sleek a profile as some and plenty of volume in the mouth, with a nutty character of raw almonds and that hint of rooty devilry.