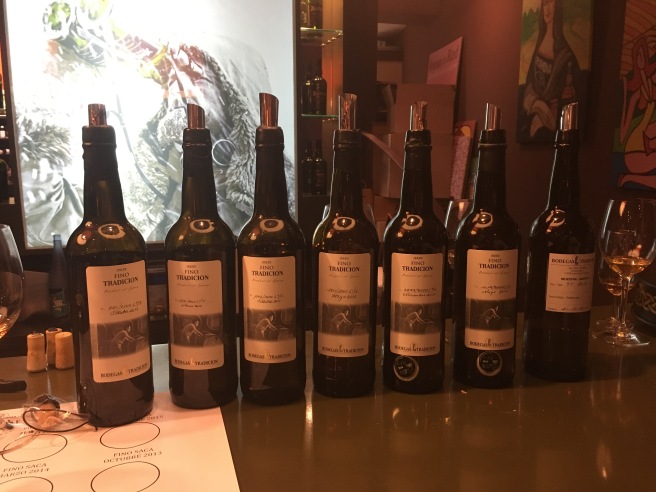 I have been fortunate to attend some really outstanding tastings in the last few years – of sherries and otherwise – but on Monday night I took part in one of the best that I can remember. The tasting was the first of three hosted by Reserva y Cata as part of International Sherry Week and the place was absolutely heaving: standing room only. And that was frankly no surprise because the concept and wines involved were first class: a vertical tasting of wines by Bodegas Tradición from the Sobretabla used to make the fino all the way to their 45 year old amontillado, by way of all seven fino releases and including special bottlings from criaderas of the fino and amontillado.

It was lead by Miguel Llanos, Tradición’s Commercial Director and guy in Madrid who for me has been one of the unsung heroes of the so called sherry revolution. Three or four years ago when sherries started to appear on the shelves of vinotecas and restaurants the Tradicion wines were at the fore and a lot of that was down to Miguel, who was leading tastings of these wines when that was still an unusual occupation. To my great regret I never made it to any of those tastings years ago but this one was worth waiting for.

Even better, we were also joined by Lorenzo Garcia Iglesias and Helena Rivero, the Director General and President of the company and even several of their colleagues, and whereas Miguel focussed on the characteristics of the wines, Lorenzo in particular provides some fascinating thoughts and explanations of the way the project and the wines had developed (and in relation to Esparto grass and its uses in furniture and footwear manufacture).

And that was really the central theme of the tasting: the way that the bodega, the fino solera and the wines had developed. Tradición’s is a relatively unusual story because despite a long family tradition the bodega itself is relatively new – founded in 1998 – and for the first 14 years it specialized in high quality VOS and VORS wines with average ages well above that of the bodega itself. They didn’t release a fino until 2013 (I was convinced I had missed the first releases but found out I was in on the ground floor) when they realized that the botas of fino originally acquired to refresh the solera of the amontillado had the quality and character needed to make an old, characterful wine in its own right. From there, what was a handful of botas, subject to static ageing in a corner of the bodega, has now become a solera with four criaderas producing two sacas of 3,000 bottles a year of a fino with an average age of around 12 years (which in turn is used to refresh the amontillado solera).

I love tastings which include a nod to the raw materials and and give you a sense of the different stages of the wines, but there were a lot of wines here so I am going to have to summarize my notes somewhat (I also link to past tasting notes):

And those were the finos: an absolutely cracking flight of wines. It was great to taste them altogether and it made me change my mind about quite a few of the things I had written in the past. It was also fascinating to think about the wines in the context of the changes from static ageing to the solera and its expansion, the experimentation as the solera was built up and the different climatic conditions. (And it must be said, a chance to try wines from a new solera that has been created in recent years, even if from older wines and older botas, is rare indeed.)

It was also one of the clearest demonstrations of the value of seasonal sacas and dated bottlings. The differences in amplitude between the spring and autumn sacas was very clear, but also the differences in the wines of the different years. In particular I was intrigued by how different the spring sacas were: super fine, elegant fino in 2016; a meaty, punchy and sharp wine in 2015; seawater salinity and mineral in 2014; and floral and almost juicy in 2013. Some of those differences would be down to bottle ageing, but not all of them, and the variety in the wines  made an enjoyable tasting even better.

And we didn’t finish there either. We went on to taste wine from the second criadera of the amontillado and the VORS amontillado itself. These wines are absolute masterpieces and I am shocked and dismayed that I haven’t tasted them on this blog. I will search out an opportunity and write a proper post soon because after all those finos I just couldn’t give them my full attention.

In the meantime, I was really glad of the opportunity to taste the second criadera. If my notes are accurate the amontillado solera would have six criaderas, fed in turn by fino that has been fortified and with an average age of about 15 years. This second criadera was itelf a VORS, or at least a VOS, at about 30 years old, and had a fine slightly, sweet and citrus nose, rich flavour and balanced salinity, but the finished article was even better. According to my notes,  greater clarity and a richer colour, a “mixed marmalade” nose of sweet citrus, and bite, acidity and some bitter wood flacours to balance the blackened caramel. (I had never reflected on it before but the sheer amount of biological ageing of the fino that feeds these soleras really contributes to a very fine, elegant amontillado indeed.)

So an outstanding evening all round. As I posted at the time, my sincere thanks and congratulations to Bodegas Tradicion and Reserva y Cata for an outstanding event, one that will live long in the memory and already has me looking forward to the coming sacas.