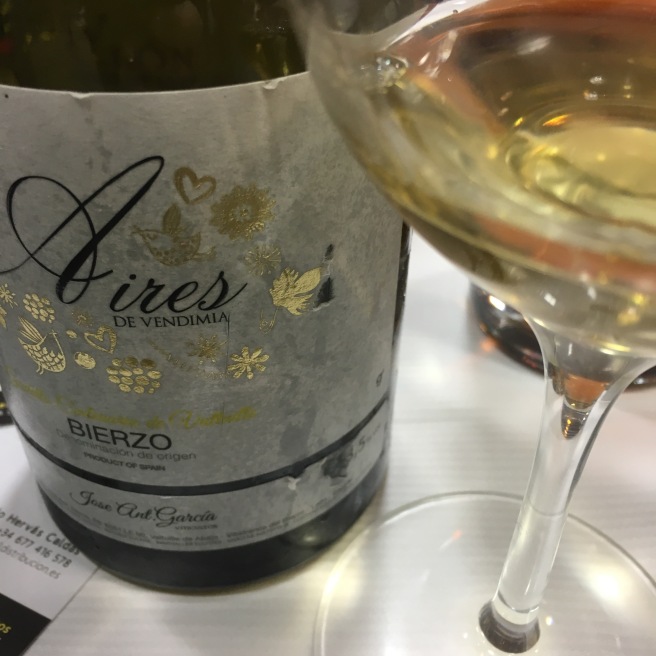 The veil of flor has a bit of mystique to it nowadays and as a result you find wines popping up all over that claim an acquaintance. Here we have Aires de Vendimia, by Jose Antonio Garcia, a 100% old vine godello from Bierzo that is labelled “oxidative ageing” but, we were told, had had occasional spells under flor, which I tried this week at the IV Salon de Vinos de Terruño. (In recent times I have also tried similar wines from la Rioja, Gredos, and even further afield.)

This is perfectly nice stuff, no doubt, and probably a welcome variation for those accustomed to a straight up godello, but as always I miss the mineral power that the flor in Jerez and Sanlucar reveals in its palomino hosts and, as a result, the oxidative touches in the wine seem to make it a little bit top heavy compared to a very young palomino oloroso.

I guess the veil of flor involved is a different strain of saccharomyces and the conditions are certainly different – Bierzo is a long way from Jerez. In fact a better comparison would probably be with Jura or Arbois rather than Jerez and Sanlucar. As a result, the flor on these more northern wines never seems to have got to work like the flor of Jerez and Sanlucar.

More importantly, the wine involved just doesn’t seem to have the same mineral depth. Palomino is often written off as a “neutral vessel” but the really good palomino wines are capable of really powerful flavour and sapidity – just try an UBE and tell me it is “neutral”. When you don’t have that underlying power and sapidity, the overall effect of flor and wine is less substantial: I often think of the wines of Jura and Arbois as like ocean going yachts, with a cloud of sail above the surface and a sleek profile below, while the wines of Jerez and Sanlucar are like big salty icebergs, with a craggy profile above water and a massive presence beneath (and you know who would win a head to head there).