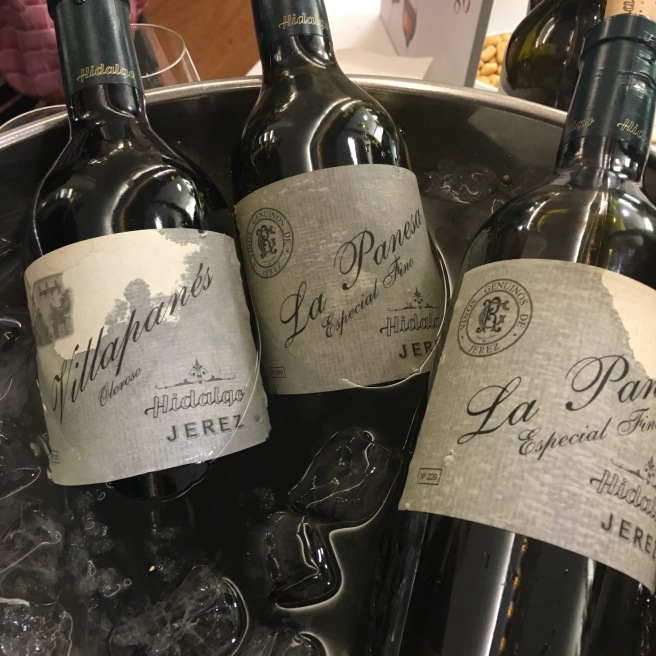 Had a pretty enjoyable afternoon yesterday in Lavinia tasting some nice wines from the likes of Emilio Hidalgo, Tradicion, Fernando de Castilla, Valdespino, Barbadillo, Gonzalez Byass, La Sacristia AB, Diez Merito, Yuste, Maestro Sierra and Baron. There may have been more but memories and notes are somewhat blurred (there was definitely a new bodega with only a palo cortado but the name has gone) – and not for the first time.

Despite the title reference to the 21st century the emphasis was old school/old favourites (notwithstanding some happy discoveries like the manzanilla La Kika). It was pretty rammed by the end but early doors I was able to try the Guita en rama (October 2015), Solear en rama (Winter 2015), Sacristia AB manzanilla en rama (Second saca of 2015), and Fernando de Castilla en rama (December 2015) in quick succession and with the Pastora manzanilla pasada en rama (2015, and which had much less of the apple profile this time, which I was told could have to do with the time in bottle). Very interesting comparison across those wines: a lot of the characteristics that I had remembered were there. I was also able to compare the Sacristia AB manzanilla (from Yuste) against la Kika (also Yuste) then the Tradicion Fino (November 2015) and Panesa, before moving up the gears with marvels like the Tresillo, the Fino Imperial, the Antique oloroso from Fernando de Castilla and the 2014 amontillado and 2015 oloroso by Sacristia AB.

Probably the highlight was trying three Panesa’s bottled in different years – a 2015, 2014 and 2013 (not labelled as such but – the differences were subtle but interesting. Of course it is  debatable whether the differences are due to the wine coming out different in the sacas or the time in the bottle – most likely a bit of both – but at least yesterday the 2013 seemed to have a bit more expression to it.

Unfortunately my methodical approach meant I missed out on some beauties as the horde of patrons consumed all the older and sweeter wines – will have to come back for the Tradicion PX and cream – but by the end I was a few over the eight and over an hour late home so maybe it is just as well.

Overall a cracking event and kudos to Lavinia for organizing. Was also a good opportunity to see some old friends – was great to see Cesar Martin from Lakasa – and meet some top characters from the world of wine and blogosphere. Look forward to the next one!