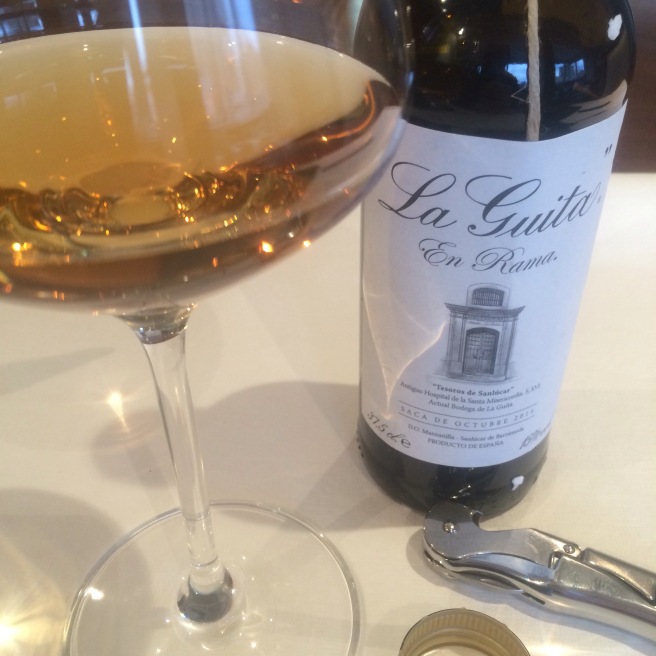 Just look at the colour of this. Pretty amazing colour for a four and a half year old manzanilla bottled a mere three months ago. Bears no resemblance to the classic La Guita manzanilla I have had litres and litres of in the sunshine over the years and in fact really reminds me of one I had last year that had been in the bottle five years.

La Guita (an old Andalucian slang term for “cash”) is one of the classic manzanillas and the bodega from which it comes – Domingo Perez Marin – is owned by  Grupo Estevez.  This wine has been selected from one hundred year old soleras located in two different bodegas, the Misericordia (originally a 16th Century hospital and featured on the label) and Pago Sanlúcar Viejo. It is the first saca en rama from La Guita and as you can imagine there has been a lot of expectation.

It is beautifully presented and the official “La Guita” web has an excellent ficha with details of the vines (all Sanlucar, mainly Pago de Miraflores), the soil type (chalky/limestone rich clay), acidity and sugar content etc. A couple of datapoints that are missing are the number of criaderas, sacas etc but the ficha is well above average as it is (and much better than it was last year, from memory, so well done).

So anyway, getting back to the wine itself, the colour is tremendous – a real old gold, like old brass cuff links and collar studs. On the nose too it is mineral – tin, with sea air rather than salt and orangey citrus – reminded me almost of a Loire white in some ways.

On the palate I get those same characteristics, nice minerals – not aggressive salinity by any means, very smooth and integrated but enough bite to be interesting. Has a lovely suggestion of sweetness and citrus notes – again orange peel. Not the biggest volume (compared to the Solears it lacks juice) but nice flavours nevertheless. Also a really nice length and the citrus notes persist making it a very pleasant finish.

This is extremely drinkable, by which I mean I need a bigger bottle (or several).