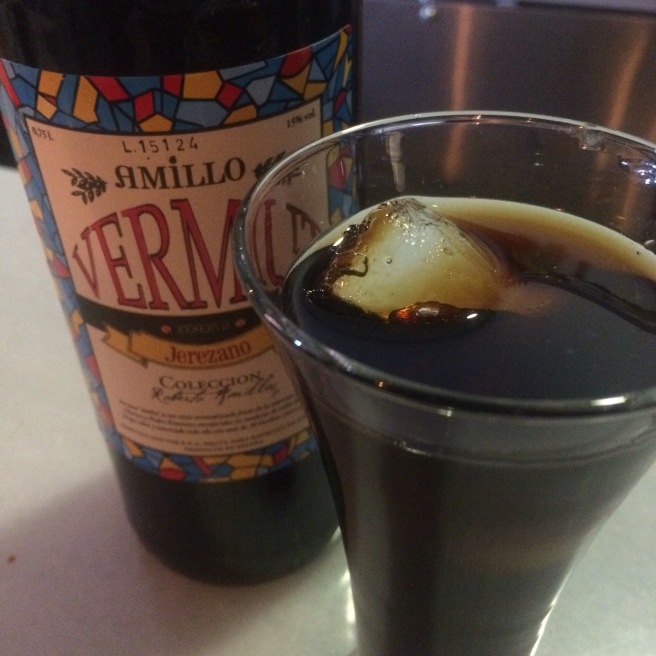 A lot of chat about vermut jerezano recently – mainly due to the release by Lustau of theirs – but contrary to much of the publicity theirs isn’t the only show in town.

Here we have a classic, old school vermut jerezano from a relatively new label – the Coleccion Roberto Amillo. Roberto Amillo is a guy from Logroño in la Rioja (pretty much as far as you can get from Jerez in Spain) who is said to have the biggest private collection of sherries and brandies, and sherry and brandy artefacts, in Spain. Never met the chap but can’t be much wrong with anyone with hundreds of sherries in their cellar. Apparently out of his collection he took to selecting and bottling his favourite wines and brandies and, as it happens, vermut. I first came across the Coleccion when trying his palo cortado in a big hitting line up at Enoteca Barolo and although I found it a touch on the acidic side for my tastes it was a special wine alright.

I find it hard to judge vermouths against each other although I have had plenty of them. In particular I was fortunate enough to experience an absolutely historic cata of bottle aged vermuts (and similar) from Ignacio Villalgordo’s collection (in Vila Viniteca) even if it served only to prove how little I know.

As for this one, first up this has a strong, old oloroso vibe to it – reminds me a little of an old Barbadillo Quina I tried once (but not quite as concentrated or bitter). It is made with oloroso and pedro ximenez and 30 botanicals (it says on the label) but certainly isn’t sweet or sticky. Neither is it over-bitter – in fact it is very tasty but still pretty refreshing stuff.

Overall this is very nice in fact – seems to me to have a bit more bite to it than a lot of vermouths but isn’t overdone. Well worth trying.