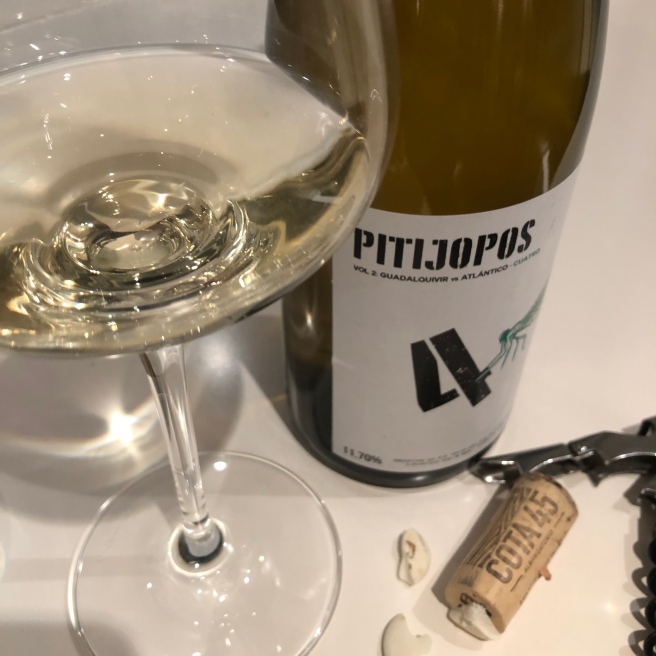 Three years now since the first night of the Pitijopos (Volume I) – for me one of the most memorable and educational nights as a wine drinker.

For the uninitiated, the Pitijopos are sets of six “mostos” from 100% palomino grown in six specific sites – in Volume I from across the sherry region and in Volume II from around Sanlucar, fermented without temperature controls in bota at Cota 45, and released as boxed sets with the aim of demonstrating the different terroirs and the characteristics they can imprint on the wines of the region.

Volume II – which a few colleagues and I tasted together back in January last year – is all about Sanlucar and sets up a contrast between the vineyards near the Atlantic and those inland, influenced by the Guadalquivir river – and this is one of the wines from that particular box (which if you are interested are currently on sale in single file at Reserva y Cata).

Specifically, it is the wine from a pago called La Atalaya, said to be a fascinating “hybrid” pago halfway between the river and atlantic pagos, 10,75km from the sea and characterized by albariza antehojuela which makes for direct, fresh wines, albeit tempered by the inland location and climate.

When first released it had a very aromatic nose of lemon and seaside air, a fresh start, nice juicy volume and a long, mouthwatering saline, seafood shell finish (or so I wrote at the time at least).

A year and ten months later it is still aromatic and fresh but seems much more complex. The citrus nose now has a strong air of bicycle inner tube and a hint of diesel, and you have that same mineral complexity on a palate that is still juicy and jammy, with salinity that is really only noticeable in that fresh finish. I really like it in fact – would even say it has improved in those two years (as these palominos tend to do imho).

Long live the Pitijopos and bring on Volume III!