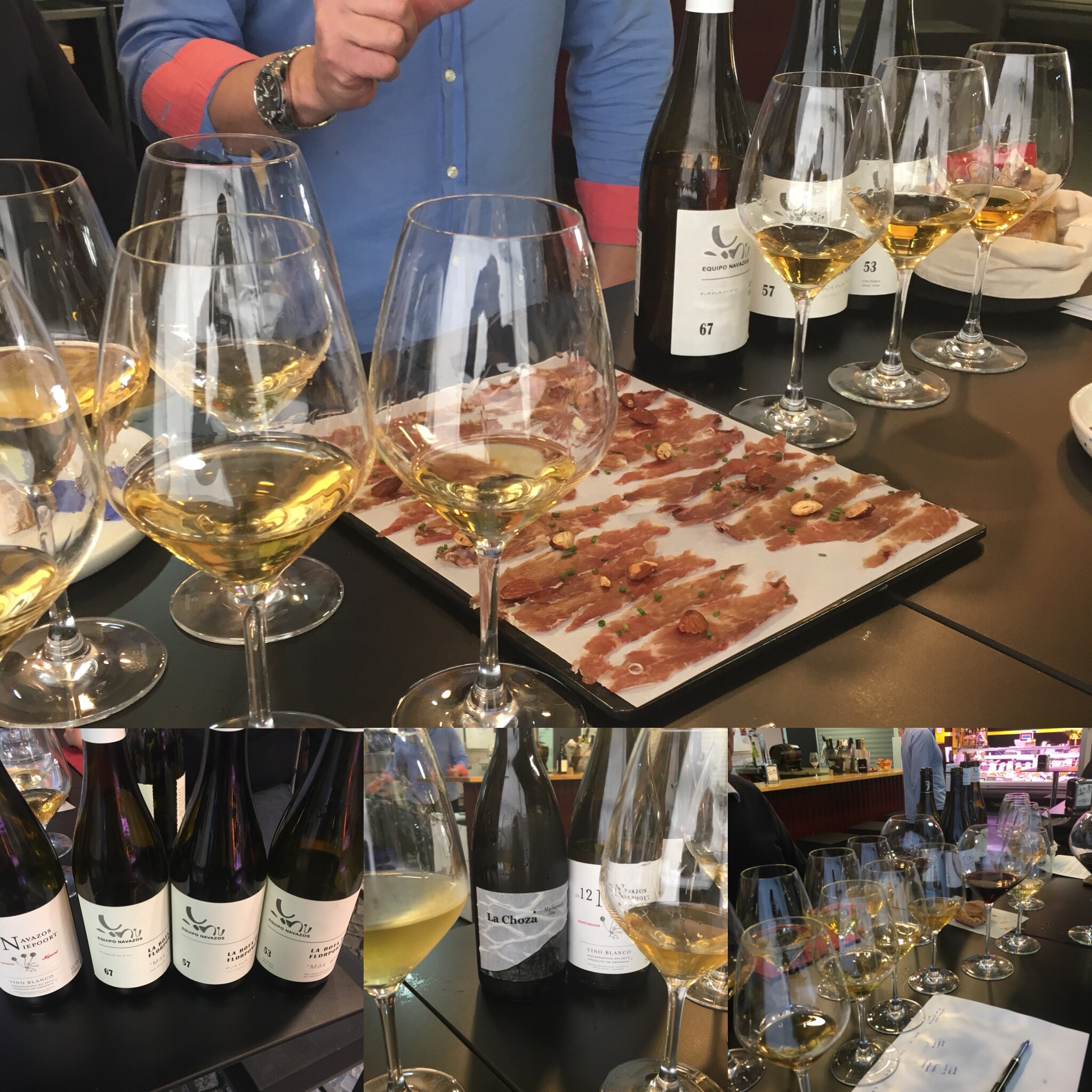 The blog is fun but there is no doubt it is hard work, involving lunches and dinners that sometimes last several hours and multiple bottles of wine. Yesterday was a prime example, as the author and two esteemed colleagues – Jens Riis of elmundovino and Richard van Oorschot, maverick maker of “Pilgrim” – put in a pretty solid shift at Territorio Era.

The wines under scrutiny on this occasion were the Florpower releases by Equipo Navazos: unfortified palominos from Pago Miraflores, and specifically, Number 53 “Más allá” (the MMX), Number 57 “Florpower” (MMXII), and Number 67 “Más acá” (MMXIV). For the sake of contrast we also opened a bottle of the 2012 Navazos Niepoort, an unfortified palomino from further inland (I would swear it was macharnudo), and for comparison’s sake we also compared that with Callejuela’s La Choza. (We also warmed up with a really interesting South African white wine and finished off with a Lirac from the South Rhone, but who is counting?) And the sacrifice was not in vain: we had a cracking time and it was pretty instructive too.

The number one conclusion that we drew was that it really helps to give these wines time. In fact it is something I have been observing for a long time: unfortified palomino wines can be slow to get going after opening and really grow in aromatics after a little while. Of the three Florpower wines the biggest beneficiary was Number 53, the 2010, which started like super-bitter grapefruit but took on haybale aromas and became softer and sweeter like a young amontillado as time went on, but all three improved over time. (Of course this could also have to do with the excellent cooking that was arriving and disappearing with impressive speed.)

The second observable fact was that these florpower wines are a work in progress and you can see the guys at Equipo Navazos are not afraid to try a few different things. Whereas the Number 53 (and presumably the original, Number 44 which we didn’t have a chance to try (because we didn’t have any)) was only 12% and a little underpowered the Numbers 57 and 67 both had that little bit more oomph at 12.5% and all the better for it. You would guess it was a matter of selection of more mature fruit – 12.5% is a pretty good number for Miraflores you would say.

Third, although it was really interesting to see the references to months “under flor” in the description of how these are made, with the exception of the 53 (which really opened up like a milder amontillado as the lunch went on) the influence of that flor was limited. There was still plenty of fruit and body in there and curiously the 53, which ended up smelling and tasting more biological than the others, started off with the stickiest, least saline finish.

Fourth, and maybe I should have started with this, the class wine of the three was the Number 57, or MMXII. By pure chance it is the only one of the three wines that I had had before (not once but twice) and I am glad to say it was just as good as I remembered. If I had to compare it to anything I would say it was like a muscular burgundy: nice gentle acidity to start and then a compact profile with full flavours of a bundle of fruit (sweet and sour citrus and white fruit), a spine of minerals and a nice tail of a fresh saline finish. I guess a fair bit of the credit for that mouthful of flavours would go to the harvest – 2012 is spoken of as a great growing season down there and this certainly is consistent with that – but it was also noticeable how much fruit there was in a wine harvested a good few years ago. Terrific stuff and full of what my colleague Jens Riis described as “disfrutability” (TM or whatever).

Comparisons are odious as they say, and the other two certainly weren’t helped by having to compete with the middle child of the bunch. The Number 67 had a lot in common with the 57 but by comparison seemed a little cruder, a little more brash and not as polished. The 53 on the other hand was a fish of a much different kidney: first up the balance of flavours was much more grapfruit than anything sweet or soft, then it went through a phase where it seemed a bit underpowered, and then it opened out aromatically in a really interesting way. Jens reckoned it had a lot more “Sherryicity” (but I reckon he was pushing it with the catchphrases).

And that brought us to the two other palominos. The Navazos Niepoort 2012 was really interesting aromatically and you would swear it was a macharnudo wine but while it had this great aroma and was tasty first up it maybe just lacked a bit of depth and oomph. Just didn’t seem to have that compact shape and length of the Number 57. And that we compared to la Choza – a 2015 (?) macharnudo unfortified palomino that had a lot more brute strength than the Navazos Niepoort: 13.5% compared to 12.5% to begin with, and yet again you would say well spent. Not the same floral, herbal nose – this one had more than a bit of raw meat and punchier herbs to it – but a big savoury mouthful and an interesting comparison.

And as quickly as it began, after no more than two or three hours (and a couple of other bottles of wine that fall outside my jurisdiction), it was over. Some really interesting wines, one of them high class, and a highly disfrutable lunch by any standards.