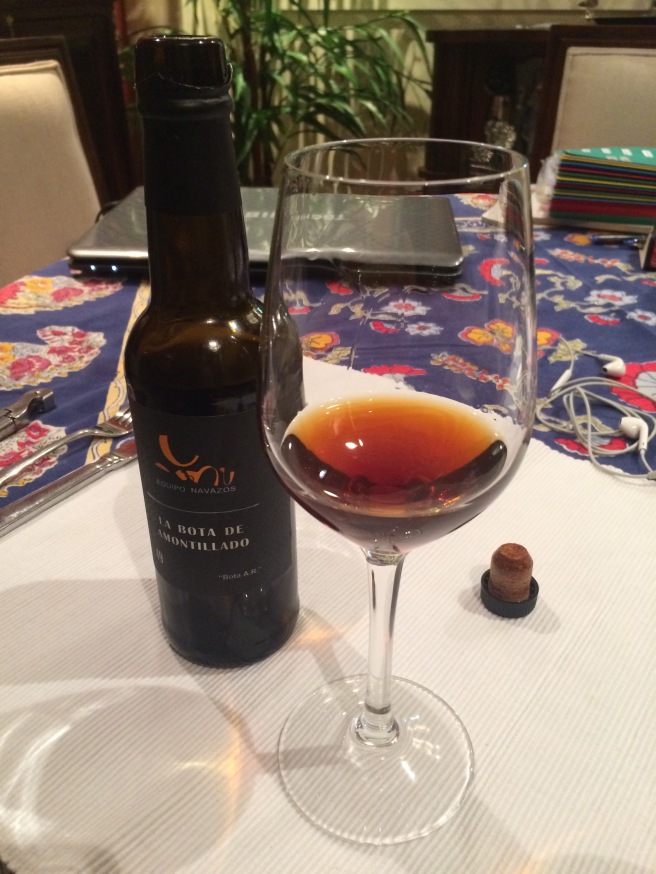 Equipo Navazos (Team Navazos) originated as a group of enthusiasts who would visit bodegas in search of the “special” soleras and even individual botas and has evolved into a label that has played a huge role in bringing fine sherry wines to the attention of the wine drinking public worldwide.

They still sniff out prize “botas” from classic bodegas but now they release them for sale in numbered bottlings – they are now in the high 50s – some of which are cracking wines – like this little beauty. (In fact the first wine that really made me sit up and take notice of sherry was an Equipo Navazos Palo Cortado.)

It is a gem of a formula. They have released a wide variety of different wines across every category (even inventing new ones, if you believe everything you hear) and with a clear emphasis on characteristics and quality. By numbering the releases, they also create vintages/scarcity – explicitly recognizing that wines do evolve differently over time, permitting comparisons of development through bottle ageing and, lets face it, appealing to the trainspotter/collectionist type of wine buff.

There is, of course, a downside. If every bodega were to separate the prize barrels, the rump would inevitably decline, while the major beneficiaries of the scarcity may not be the makers but rather the stockists: already bottles of low number Navazos wines can be obtained from opportunists at greatly inflated prices. In their exuberance they can also, maybe, get it slightly wrong: some of the releases are more interesting than enjoyable, while some can be accused of being “test tube wines”, ideal for blind tastings but a little over the top for a dinner party.

There is no doubt, though, that Navazos have made a great contribution to promoting interest in fine sherry wines in critics and winelovers worldwide and in leading the charge towards distinctive, select bottlings. Their heart is in the right place and their work is of a very high quality. If you find some, buy it!

One thought on “Equipo Navazos”