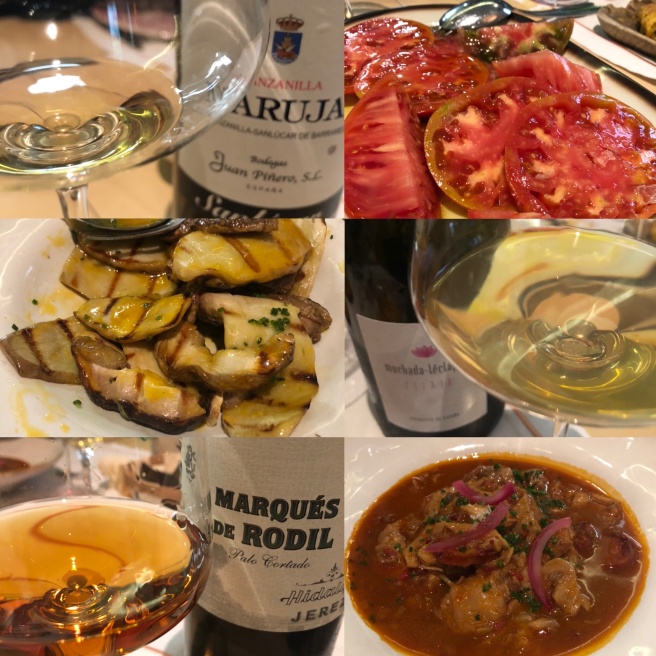 A moment to reflect on a cracking lunch yesterday at the Bistro of el Huerto de Carabaña.

The bistro is not much to look at. The restaurant section around the corer is fancier, but the bistro is an old school neighbourhood eatery with lighting you would call discreet, smallish tables with even smaller tablecloths, tiled walls, a glass front at one end and the kitchen widen open to view at the other. And given that it is smack in the middle of a neighbourhood full of restaurants at the very top end of whatever interior decoration ranking there may be (and getting higher every week) this is not the place fashionistas in the neighborhood would pick.

And neither was there anything fancy about the food: tomatoes, boletus and callos (and cheesecake). But there is absolutely nothing wrong with tomatoes, boletus and callos. The place is named for a garden and the motif is rustic: a menu full of grilled and fresh vegetables. Good quality, country cooking. In fact the only “but” I would attach to the solids was that the callos seemed to have a little too much of the garden about them – warm, rich and savoury rather than sharp and spicey.

But the best thing about the lunch was the wine, and everything about the wine. First, no sooner than I sat down than I had a glass of la Maruja in my hand – a really excellent one too from a bottle filled in August (so this has not been sat on a shelf waiting its turn) and served in a Gabriel glass.

Even better was to come. Instead of a wine list, what these guys have is a walk-in wine cellar where you can go and have a look, it is around the corner in the restaurant, and the way to get there is a Goodfellas-style shortcut through the kitchen. Now not everyone would be up for it, but if you don’t love walk-in wine cellars then I wonder why you are reading this blog, and you will have to believe me when I tell you there were some exciting wines in there – a wine loving truffle pig would have a field day.

A sherry loving truffle pig too. They had some quality wines by Tradición and Emilio Hidalgo, including some you don’t see every day, and some classics from the bigger bodegas too, all of them very fairly priced by the glass.

For winelovers they also had some of the rarer, newer wines from Jerez, and we didn’t even have to hunt them out. The sommelier, whose name I didn’t catch but I wish I had, saw our enthusiasm for the Maruja and the Marques de Rodil and proceeded to fish out a bottle of Muchada Leclapart that he had coravined (that cork was not needed any further and a bit of argon was released into the atmosphere).

It all added up to a great lunch, with some terrific wine – from the singing Maruja to an absolutely class, elegant Marques de Rodil – without breaking anyone’s bank and with the minimum of fuss. You may not have noticed the Huerto de Carabaña before, but if you get the chance you should definitely stick your neck in there.