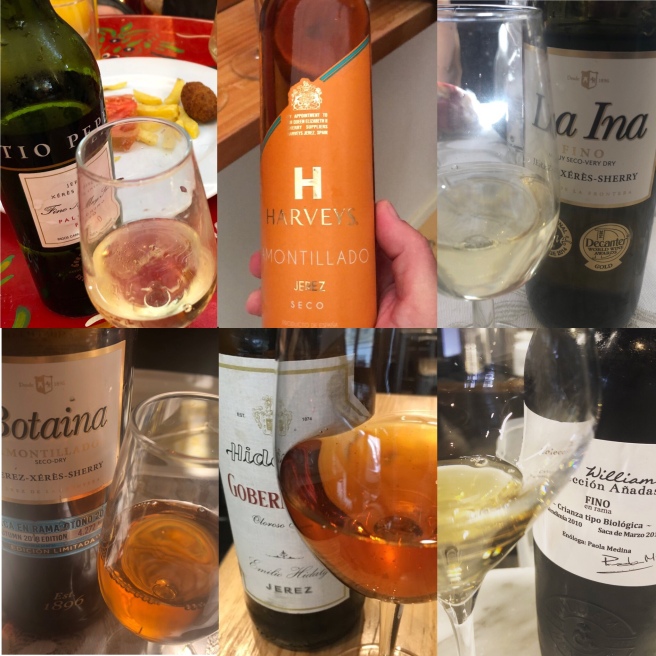 Been a cracking couple of days down in Jerez in and around the Feria de Jerez and I didn’t want to let it go by without a word or two about the wines we drank there.

I must admit to a bit of trepidation at the title of the post, because “vino de feria” is not the most complimentary way to describe one of the wines from Jerez by any means. This is not a wine fair, nor a wine tourist destination. You are not going to find many unique wines or experimenta of any kind. It is a massive event, of mass consumption and not a lot of earnest appreciation (a significant proportion of the fino that gets drunk is mixed with lemonade if that gives you an idea). In fact, almost every serious wine tasting with a bodega from the region in Madrid used start with a “these are not vinos de feria” or similar.

Having said that, what else can you call a post about the wines you drank at the feria?

First up, the one wine you are guaranteed to have a drink of at the Feria is Tio Pepe. Ironically it is pretty scarce in Madrid – even in its en rama version – but it is massive worldwide and a hegemon in Jerez. A mate was telling me it was available in 90% of the casetas at the feria and I believe them. Not that there is anything wrong with that, or with the wine. Just saline enough, nutty enough and juicy enough, served cold in little bottles, it is a perfect little freshener and cracking foil for the ham and tapas on offer from every side. Gonzalez Byass also have one of the essential casetas to visit – really top drawer.

The champion caseta of this year’s feria, however, was the sensational “Trasiego”, complete with shades made from sarmiento and a glass bar filled with 600kg of albariza. Really top class decor and top wines from Bodegas Lustau: we had fino la Ina and amontillado Botaina (they had run out of Papirusa, to the disappointment of our crew which was heavily stacked with Sanluqueños).

While I was at the “cachivaches” with my kids in the “calle del infierno” (the funfair – really not that bad!) the same crew found the bargain of the feria: Amontillado de Harveys in the caseta of Bodegas Fundador for only €15 a bottle. I hope they enjoyed it. Really. (The churros and chocolate were excellent anyway.)

The class act of my feria was to be found later that evening – a glass or two of Gobernador in the caseta of my good friend Juanma Martin Hidalgo, of Bodegas Emilio Hidalgo. Delicious wine just begging for a dish of callos as an accompaniment.

Overall no complaints from me on the liquid refreshments. The feria is not your venue for high end or cutting edge wines but there is nothing wrong with these wines (I have been in a few supermarkets where they would have been a very welcome sight indeed) and there is something joyous in the absolute ubiquity of fino (and in seeing everybody swig it down). More than anything, there is a real sense that this is a fino’s natural habitat, and it is much fun hunting them in the wild.