Two weeks have gone by since an all too brief lunch at Bar Maitea with a barely believable line-up of legendary wines old and new. In fact I still can’t quite believe it.

It all started with a glass of the Manzanilla Madura by Callejuela – a really flavourful manzanilla, from a river-influence pago and with a little bit more time in the bota, it has a bit more breadth on the beam and heft than you might expect but still has that crisp, appetite opening salinity you need to set yourself up for lunch.

That bright start became a really promising beginning when a bottle of the legendary Fino Carta Blanca, by Agustin Blázquez, appeared in front of me on the bar. This is a cult wine, a high class wine from a legendary macharnudo pago and maker, and a clear riposte to those who doubt the longevity of sherries in the bottle (me amongst them, I suppose). I had a 1990s edition in Madrid that just blew my socks off not long ago and this one, apparently from the 1970s, was in that league. Although scarily dark brown in the glass it was nevertheless absolutely intact and compact, a hint of reduction on the nose at first but soon opening up with citrus, bitter almond and old dry straw aromas and a palate that slices its way in with salinity and citrus before hitting you with weighty, salty bitter almond flavours. Really serious stuff and if the juices hadn’t already been flowing they certainly were now.

Next up was Fino Caribe by Bodegas Sancho, again an example from the 1970s and another wine with a serious pedigree. Bodegas Sancho, which like Agustin Blazquez were later acquired by Domecq, were located in el Puerto but sourced this wine from the famous “El Caribe” vineyard in Pago Añina and that combination (and its forty odd year wait to be released from the bottle) created a wine with a really unique character. Clear as a bell and an attractive chestnut colour the nose was extraordinary – like a flat ginger beer, musty but all bitterness gone, and with that rockpool aroma that is so distinctive in el Puerto. Then on the palate the oxidation was noticeable too, sweetness on the start and flavours of praline and soft nougat giving way to an intense bitterness – my notes say “white campari” which almost certainly doesn’t exist but I think you get my drift. (They also say “amarrrrrrgo”.) Long salty finish reminds you again of the rock pool. What an absolutely extraordinary wine.

As the kokotxas arrive for yet another legend, and yet another unique old wine, appears on the bar: Manzanilla Pochola by Domecq. Again a dark chestnut in colour but as clear as a bell, and once it opened up (these bottles were being opened before my very eyes and were a little closed early doors) an aromatic thoroughbred, bitterly floral and herbal. An amazing palate, slipping in with a zing of Sanlúcar salinity but then the breadth and characteristics of pago macharnudo. A “manzanilla de Jerez” if ever there was one.

At this stage the genius behind the bar apparently observed your correspondent struggling to keep up with the historic wines and decided to go with an absolutely beautiful dish of pigs trotters give him a little bit of a breather in the form of the modern/traditional Palo Cortado Viejo C P (Calle Ponce) by Valdespino. In fact it allowed a fascinating comparison of the slightly oxidated macharnudo manzanilla from before with an elegant modern macharnudo palo cortado. Bright, clean and clear amber/chestnut colour and an elegant, quiet nose with buttery notes, nicely integrated salinity and roasted to bitter almonds on the palate fading to burnt caramel flavours. Much deeper and more consistent in its oxidation than those that have earned it in the bottle and tighter in profile. One of the most elegant of the modern palo cortados and a class wine in its own way.

And in case that wasn’t modern enough I was at the same time given a glass of a mysterious whit wine labelled only “FP” (a probable “florpower” prototype) that in the company of all these venerable old legends was like a burst of sunshine on a cloudy day: a nose that was all fresh sweetness and a crisp youthful palate. A really nice fresh wine and one to look forward to!

But then with a fantastic cuajada dressed with honey and pine kernels your man produced another striking old beast and all thoughts of freshness were banished from my mind. The Pedro Ximenez Viña 25 seemed to epitomize for me what an old Jerez pedro ximenez should be all about, its sweetness tempered by a nose of pine forests, a a palate of black coffee/dark chocolate bitterness and an incredibly light, fresh feel to it. Really fine texture and piercing flavour and another excellent match with the sticky, sweet honey of the cuajada.

And just when I thought I was going to make my train with relative ease the final, exceptional treat: a little, very old bottle of Domecq’s Amontillado Botaina. A little cracker that was amber gold in colour – much lighter in colour than the finos – and in absolutely perfect condition, with hay bales and vinegary toffee in the nose and a superb combination of zing, acidity and sapidity on the palate. Absolutely superb, and there were tears in my eyes as I swigged it down and headed out, dazed and a little awed, in search of a taxi.

As I said on the day, one of those lunches I will always remember and never be able to repay. An honour and a privilege. 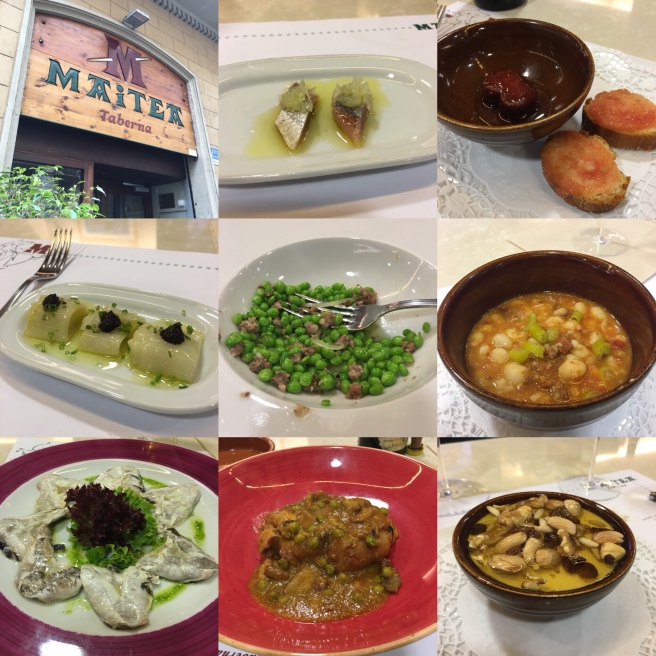 One thought on “A lunchtime of legends in Maitea Taberna”