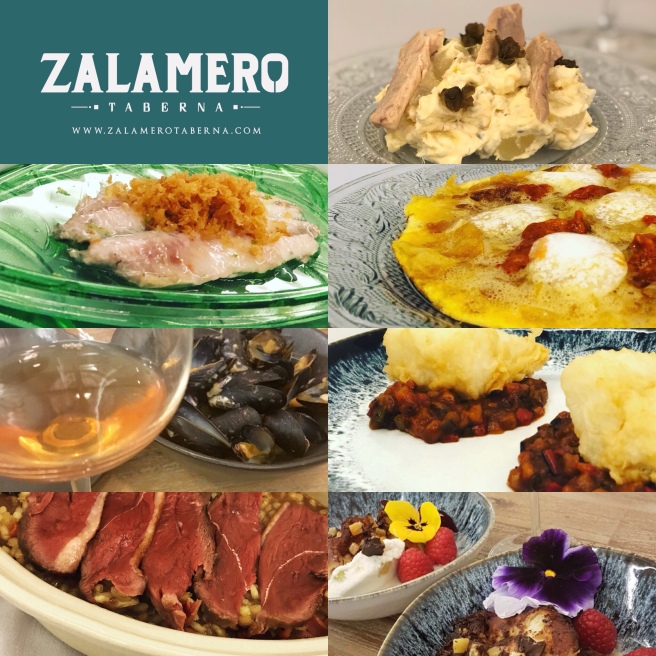 Was invited to a very special lunch, and occasion yesterday: a preview of Zalamero Taberna, the fantastic new project of the remarkable Ana Losada and her band of merry men.

The people behind this project – Ana, David, Fernando and Carlos – are absolutely top drawer and I was so delighted to see them back in action after far too long (since September 2016 and a tearful end of an era) that that alone would have made it a great day. But I can tell you that there is every reason to be excited even if you don’t already know Ana and the crew.

Zalamero Taberna is at Narvaez 67 and despite the 3km between my office and their door there will be a path worn into the pavement before long. It has a menu of some 20 odd cracking dishes – yesterday we managed to get into 11 of them – cecina de león con pan de cristal tostado, ensaladilla con alcaparras fritas, boquerón crujiente al limon, mejillones al curry tailandesa (beautifully paired with a Rey Fernando de Castilla Antique Palo Cortado), tortilla esparragada de morcilla patatera, caballa ahumada, bacalao rebozado con Samfaina, arroz meloso con pato, un riquísimo guiso de garbanzos y morro (again a cracking pairing, the Oloroso Gobernador by Emilio Hidalgo), cochinillo deshuesado and an absolutely delicious, light and delightful torrija (with the obligatory Pedro Ximenez, this time by Ximenez Spinola).

They were all superb, tasty, fun, and beautifully presented, and as you would expect given the individuals involved they were accompanied by some superb and really interesting wines: in addition to the sherry action mentioned above there was Blanc des Blancs (Suenen) and classic wines from Bierzo (Corullon, no less), Cortijo de los Aguilares, Utiel y Requena, and I am pretty sure I am forgetting at least a couple more. Really thoughtful pairings – contrasts and matches and a lovely sequence – in particular the three reds were expressive and had different personalities, the contrasts between them only making them more enjoyable.

Excellent food, excellent wines, beautifully presented in a really bright, welcoming little bistro. I am not the man for critique of decoration but the ambience – convivial as it was – was spot on, the table was unfussy and the seats were probably the most comfortable I have had in a restaurant in Madrid. And of course the service was of the very highest order. There were a lot of smiles yesterday but also a fair few nerves – and we were later told that mistakes had been made. (All I can say is that if mistakes were made I would like to see perfection.)

They will open next week and I can’t wait for them to do so – just over half the menu left to try and I haven’t even started on the wine list yet. Yesterday’s was a meal that I will remember for a long, long time, but I don’t plan to leave it long before going back. See you Tuesday night!

One thought on “Zalamero Taberna”