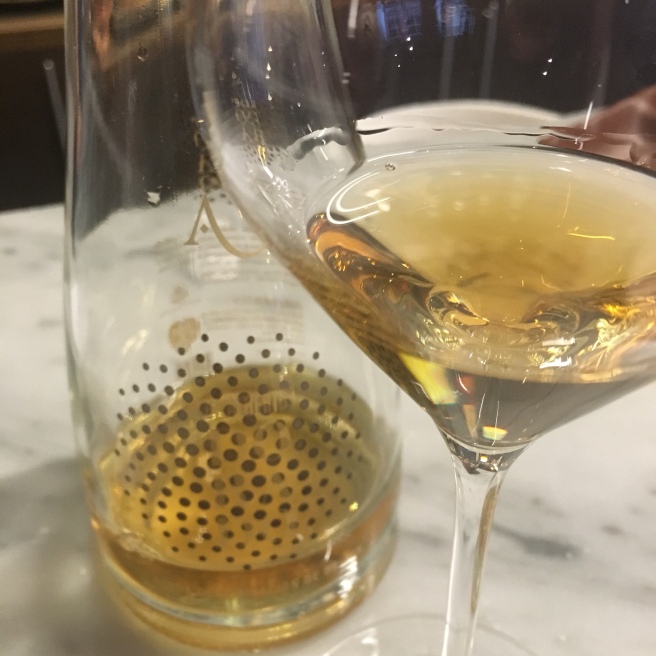 You know that the guys in Jerez are doing something right by the number of would-be Jereces that are appearing. These days it doesn’t matter what region you are making wine in, you aren’t anyone if you aren’t making something under “flor”, something oxidated, something does with palo cortado or at the very least something aged in a barrel that was once used for fino, manzanilla, oloroso or similar.

Now the guys in Rueda have an answer to this. Their “dorados” are oxidated and are in some cases from soleras, but are no recent invention: if you know your history you will know that they are in fact backed by a long tradition.

Even so, it is surely no coincidence that after fifteen years in Spain I only start to see them now, with the “sherryrevolution” at full steam. And indeed in just a couple of weeks I had my first during a spectacular lunch at Alabaster and this, my second, during a cheekier lunch at Angelita. (Unless we include Beatriz Herranz’s Bruto, but that is 100% palomino so doesn’t seem to fit the bill.) Since then I haven’t stopped seeing them all over twitter, and although you never know whether it is the same 6 bottles in all the pictures it certainly seems like they are making a splash.

This one is 100% verdejo (it says here) and was very interesting if not to say quite curious. As you would imagine there is fruit in the nose but whereas your oxidated sherries give you an impression of sweetness on the nose here it came across as bitter fruitiness, like an orange marmalade. Then on the palate it had a bite of acidity and then again that fruity bitterness. To be honest I found it difficult to get into, but if twitter is anything to go by it won’t be long until my next opportunity.