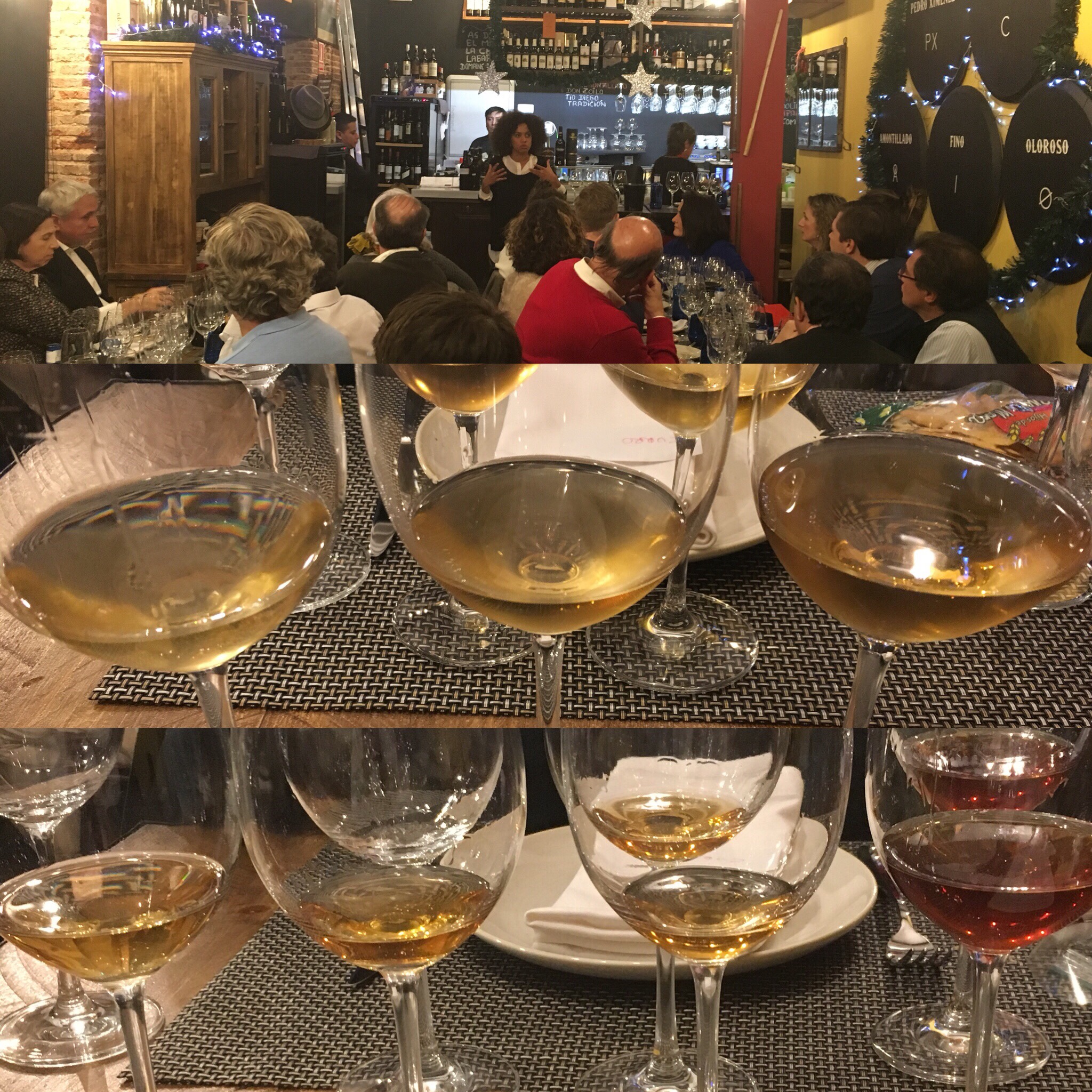 Paola Medina of Williams & Humbert is one of the most important wine makers in el Marco de Jerez and was the star of yet another absolutely outstanding tasting at Taberna Palo Cortado – this time in their new premises at Espronceda 18.

Williams & Humbert are well known for their collection of vintage wines – they are said to have a cask set aside from every harvest since time began (or at least since the bodega began). Until relatively recently – in fact until the Medina family took over the reins in the early noughties, the wines that were released were of the old oloroso variety, but for the last fifteen years they have also been setting aside 10-20 casks of wine a year for biological ageing and the results – most vividly experienced via the Colección Añadas of a year or so ago – have been ground-breaking. Just as Ramiro Ibañez’s Pitijopos collections have laid to rest any doubt about the relevance of terroir for the wines of the region, Williams Colección Añadas are about the best evidence for the relevance of vintages.

And the tasting provided more of said evidence and also some good news, in the shape of new wines. Taking the good news first, Paola told us that they were in fact making even more distinct wines than before. Since 2015 they have been making an ecological fino de añada, and in addition to the finos and olorosos de añada that we already know and which come from wines from vineyards in Añina and Carrascal (de Jerez), the bodega is now also making separate wines – in fino and oloroso – with fruit from those two pagos/viñas, making a total of seven specific wines for each vintage.

And indeed the first wine we tried on the night was the first of the new kids on the block, the Fino Ecológico de Añada 2015, made with palomino from a vineyard near Trebujena and in process and a lagar (on the road from Jerez to Rota) that are fully separate from those of the other wines. (Apparently, in order to get the certification of ecological you need the ecological alcohol from the Rioja and you have to keep everything separate, which requires some pretty extreme measures – early harvests and fermentation in a different town, for example.)

Whatever the difficulty level it was a cracking little wine – had a nice subtle chestnut aroma on the nose, was full in body again with a suggestion of chestnut and had tremendous sapidity and zing for a wine that had only had a bare two years under flor. Paola attributed the sapidity to conditions in the lagar, where a lovely, healthy, thick white veil of flor formed, but this will be an interesting wine to follow.

Next up was Fino Don Zoilo, a classic fino with a good nine years under flor. A classic that we don’t see often in these parts since the majority is apparently exported to Japan, where in addition the public prefer filtered, clarified wines. Couldn’t have been more distinct to the wine that preceded it: even aside from the biological angle and the Jerez/Trebujena sourcing it was solera rather than vintage, nine years under flor rather than two, and filtered. Those differences showed: although the 2015 had sapidity this had sharper saline intensity, was finer in body and greasier too. To me it had a chamomile tea-like nose, a much dryer palate with less chestnut and more raw almond and mor pronounced citrus notes, with a classic fresh finish. Top stuff.

Then came the wine that I was looking forward to – a look at the Fino de Añada 2010. I was a big fan of the Fino de Añada 2012 and probably even more so of the Fino de Añada 2009 and was looking forward to more of the same but this is a fish of a different kidney altogether. Whereas the Fino de 2009 was so chestnutty, generous in body and full of manzanilla-pasada like fruit, this one is incredibly dry, fine, and sapid, a much more austere wine altogether. Surprising contrast and a demonstration of the variations possible in static ageing: whether as a result of the rainy growing season in 2010, or the climatic conditions in the years that the wine spent under flor, two wines from the same pagos in consecutive years are totally different.

The surprising 2010 was followed with Amontillado Don Zoilo, an amontillado with an average age of around 12 years, of which nine under flor. Specifically, we are looking at the continuation of the Fino Don Zoilo: wine from the last criadera of Don Zoilo is used to refresh a small solera of one criadera and the solera itself of this amontillado. The resulting wine, it must be said, is fantastic. Has a lovely hint of honey on the nose and honeyed chestnut on the palate and the oxidation and concentration (this was 19%) really seemed to complete what had been quite an austere fino, while keeping its lovely sharp profile and fine body. Really buzzy, enjoyable wine that would be superb on the dinner table with almost anything savoury.

After the amontillado it was time for an oloroso but not just any oloroso: our old friend the Oloroso de Añada 2009. Really enjoyable as always, and maybe it was the time of year but it just reminded me so much of Christmas pudding on the nose, with brandy, burnt Christmas cake, nuts and figgy fruit. (There was another top shout from one of my colleagues (or somebody anyway): baked banana.) Then after all that enticing richness there are saline flavours and a little bit of burnt caramel bitterness in there. Really such an enjoyable, juicy wine.

The last wine up was the Canasta 20 años, the VOS version of the original Canasta (which has around six years of ageing). It is a cream of oloroso and pedro ximenez. Unlike some creams the Canasta wines are blended at the outset rather than prior to bottling as a means of enhancing integration and you have to say this resulting wine is extremely elegant. Nice acidity and freshness to it despite what must be a fair dollop of sugar per litre, and very nice array of flavours from figgy to cedar and even tobacco. Really enjoyable stuff, although these sweeter wines really refuse to grow on me. I sometimes wonder if I do them justice when they are tagged on to tastings of dry wines like this one:  maybe one of these days I should try to get a few of these VOS and VORS creams together and try them out side by side and in the right mindset.

And then the Taberna Palo Cortado tapas party began, with lashings of Williams & Humbert wines and an awful lot of laughter. Another absolutely top night: perhaps the best news of all is that normal service is well and truly resumed.

3 thoughts on “Paola Medina in the new Taberna Palo Cortado”