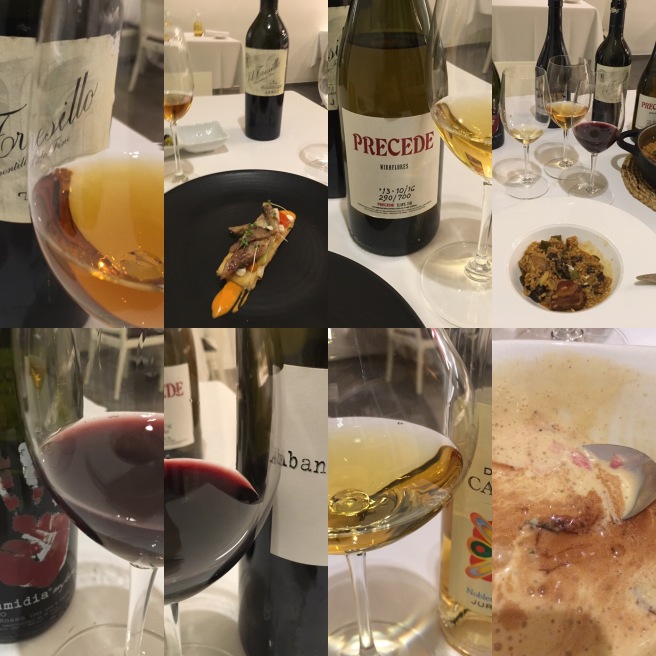 A day in Valencia is never a bad thing, escape from the big smoke to a gentler climate and a slightly different pace in what is a really pretty city. Today the sun shone and was added to enormously by the prospect of lunch at El Celler del Tossal, a restaurant recommended to me by Sabas Joosten, sommelier at De Librije,  a fella who knows his onions.

And it was a really cracking lunch. A beautiful oyster, sardines on some kind of toast, roast pork belly and turnips, rice with black pudding and ribs, rhubarb and turron. Really excellent – am going to have to walk back to Madrid – and that was just the solids.

Luca, the sommelier, is a top man and a bit of a sherry hero. Anyone who gives you El Tresillo to start is someone to be reckoned with. He followed with Precede Miraflores 2013, and also has wines by Callejuela, Juan Piñero and others. In fact he didn’t even have a full list of his sherries on the massive carta de vinos – which he descibes as the tip of the iceberg – because he prefers to work with small production wines (the Precede is 700 bottles after all). I convinced him to go off the sherry track and tried some fascinating natural wines from Austria (Weisser Schieffer 2011) and Italy (Lammidia Anfora), a ripe Douro from Portugal (Abandonado 2009), not to mention a beautifully balanced Jurancon and even a tingly-bitter moscatel based vermouth. All really interesting small production wines that worked perfectly. Whatever you need, Luca can almost certainly pair it.

No doubt about it – absolutely top drawer.