I was reminded this week of my piece on the magic numbers when I saw on a UK wine-merchant’s price list a bottle of La Bota de Amontillado Nº1, “Navazos”, December 2005, at a price of £480 (€630) (including VAT).  This wine – of which 600 bottles were released – was not initially put on open sale, but as you can see from the comment below the line, some bottles were available for €25,80. Indeed, when I caught up with Equipo Navazos their releases of the descendants of this wine were selling in the low €30s and I am told that a few years ago Clan Tabernario got their hands on a bottle of this for around that.

Of course a wine bottled in December 2005 is bound to appreciate in value, and recently there has been a surge in interest in bottle conditioned sherries (a topic to which I really need to give some thought) but it is a pretty good markup by any standards. Even more interestingly, La Bota de Amontillado Nº26, “Cinco Años Despues”, December 2010, which again was never released to the public, and of which only 150 were bottled, is the most expensive sherry on the list at £1200 (€1578). 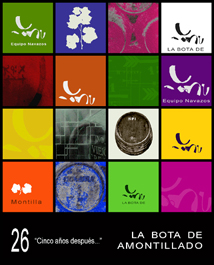 This average to poor blogger has never tried any of these wines, which are no doubt excellent to great. However, I don’t need to try them to be able to tell you where the gained value of the Navazos wines comes from: their unique character and scarcity (and I was going to suggest also their historic value).

Let’s put this in context, though: that £1200 (€1578) wouldn’t get this wine into the top 300 prices on this list – in fact it is equal 345th price on this (pretty awesome) list (although looking back some of those prices are for “assortments” of DRC, for those keen on multi bottle packs)  and less than a tenth of the £12,000 stickers on some of those very big beasts.

The wines of Jerez are still a very long way from their rightful place at the top of the pile, but I really believe that Equipo Navazos are showing the way forward. All hail to them and enjoy those 26s if you still have them fellas!

19 thoughts on “The Magic Numbers: the big one”